Anna’s Quest is by far my favourite point and click game! It’s about a little girl with telekensis who sets out on an adventure to find a cure for her sick grandpa. Her level of innocence, empathy, and resourcefulness makes Anna a great character to play as.

Much to her detriment, though, she is very naive and trusts everyone too easily. And I guess that has been the best part of her character arc having reached Chapter VI so far. Learning who to trust and not to trust has become a fundamental aspect to the story, and it’s great to see her keep pressing onward despite of the betrayals and disappointments she’s confronted with. 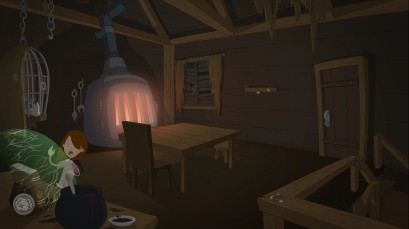 The puzzles in this game are very logical, fun, and very rewarding to figure out. Point and click games are known to have some cryptic puzzles that you’d either need a guide for or several hours staring blankly at the screen, frustrated and scratching your head.

You won’t have that problem with Anna’s Quest, as the puzzles are easy enough to respect your lateral thinking, but not so hard that you sigh or groan is resignation from trying.

There were only a couple of times where I needed a guide, but I know that if I spent a little more time to think or exhaust one more possibility, I would’ve figured them out on my own.

My gripe with this game along with anything by Daedalic, though, is the lip sync. Like, is it really that hard to program the lip sync to go with the vast amount of dialogue in this game? What I would also like to see from this company is some close up shots on the characters while they talk, kinda like in Broken Age, and maybe more physical gestures from the characters as they speak.

There’s also the problem of dialogue strings starting off as if the first syllable or so gets cut off and it’s a bit jarring when you’re so invested in the dialogue exchange.

Lastly, what I do love about this game is the amount of maps there are in it to traverse through per chapter. The point and click games I’ve played so far have had the tendancy to recycle maybe the same 5 or so locations for most of the game, and that gets a bit boring.

There’s a point in the game where you get to play as the villain in their childhood, and that really helps flesh out her character more instead of just making her pure evil. You get to understand why her heart was wrought with grief, but ultimately made the wrong choices to lead her on the path of darkness.

After you’ve vanquised her, the end seemed to happen too quickly. As it was Anna’s Quest and no one else’s, I didn’t like how quickly they narrated her ending instead of showing what happens with her grandpa after she saves him. It would have been nice to see him wrestle with the fact that she went against his wishes to go out into the dangerous world JUST to save him.

That would have made for a great dialogue to show ambivalence on his part. After all the story did begin with him forbidding Anna from venturing out into the dangerous world and she went ahead and did it due to her love for him. It’s a missed opportunity and there’s been some debate about the ending here and there on the Steam forums whether it was sufficient or insufficient for an otherwise great tale.

Loved the story about learning who to trust and seeing the harsh and dangerous world through the eyes of an innocent child. It’s sad to see how easily they can have their innocense exploited as with the case with a few characters betraying Anna throughout her journey.

The ones that betray Anna or take advantage of her, I think, was like a commentary on how destroyed some adults can be when it comes to children needing their help. And the few helpful adults that will empathize with her and genuinely want to help her is indicative of how very few adults there are in the current world that will genuinely care for children’s needs.

All in all, Anna’s Quest is a solid game. I got it full price and don’t regret it, but if you ever see it on sale, do not hesitate to get it! If you get it for even 50% off, it will out live its value.