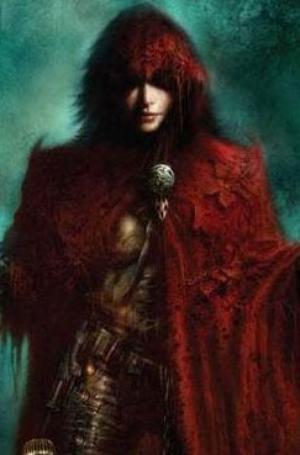 Once upon a time there was an archer named Robyn. She wore a red cloak that would dance in the wind as she rode on her trusty Stallion. Although she was a master marksman with her longbow, she also wielded a pair of daggers for close quarters combat.

She belonged to a Mercenary Guild that usually provided her with death defying bounty hunts, but today was different. Her grandmother had been diagnosed with an infectious disease and was quarantined in the middle of a forest. The town’s Alchemist concocted an antidote for Robyn’s sick grandmother and gave it to her Guild Leader.

Upon accepting the mission of delivering the antidote, the Guild Leader said to Robyn, “the Vast Wilderness is teeming with ferocious beasts.”  She smirked at his remark and snorted as she snatched the antidote out of his hands.

Robyn mounted The Stallion and galloped across a wide spread of clear land. When they arrived at the forest’s entrance, a Werewolf pounced off a tree branch and lunged itself at Robyn.

Robyn was left lying flat on the dirt as the night sky spun in her dazed gaze. From a distance she could hear the Stallion clamouring for his life. When she managed to get back on her feet, there was nothing left of her trusty steed but broken bones and torn flesh that hung from the Werewolf’s bloody maw.

The Werewolf was bent on devouring its meal until Robyn shot an arrow between its eyes. The hungry beast bellowed out in anger as it pulled the arrow out of its forehead. The Werewolf then sped off, disappearing into the deeper depths of the forest.

As Robyn approached her incapacitated steed, the Werewolf’s howl echoed through the wood. Upon hearing its hastened footsteps scuttle through leaves and dirt, Robyn cursed under her breath and ran after the creature.

“Where ever you hide, I’ll find you by tracing your stink!” She exclaimed.

Robyn trudged through the Vast Wilderness until she came across a small cabin. She entered into the poorly lit shack to find her Grandmother lying in bed.

“Grandma, is that you?” Robyn asked.

“Yes dear, it is I,” her Grandmother replied.

“But such gigantic eyes you have!” Robyn said widening her own eyes.

“The better to see you with, my dear.” Her Grandmother blinked innocently.

“But such enormous hands you have!” Robyn’s hands began to shake and reach for her quiver.

“The better to hug you with, my dear.” Her Grandmother scrunched up the blanket between her overgrown fingernails.

“But such sharp teeth you have!” Robyn said gritting her teeth.

“The better to smile at you with, my dear.” Her Grandmother smiled, revealing blade like incisors.

“But such a rancid stench coming off of you!” Robyn pulled out her longbow and reached for an arrow in her quiver. She aimed the arrow at her Grandmother and said, “don’t move!”

From the tiny window by her Grandmother’s bedside, Robyn could see the clouds parting from the night sky. The Full Moon illuminated the dark shack as her Grandmother began to rip her blanket apart. She then transformed into a Werewolf right before Robyn’s eyes.

Robyn released the bowstring and the Werewolf sprung out of bed clawing at the airborne arrow to slice it in half. Robyn dropped her bow and pulled her daggers out of their sheaths. Before she could get into her battle stance, the Werewolf kicked Robyn in the chest, sending her body flying out of the cabin and dragging across the dirt as she landed.

Robyn reached into her pocket for the antidote, but the glass vial had cracked open and its liquid contents poured into the dirt. She stabbed the earth with her daggers, hoping that the tips had been doused by the antidote.

The Werewolf pounced on top of Robyn and began clawing at her chest and biting her neck. The beast was too heavy for Robin to kick or push away, so she stabbed one dagger into its rib. It snarled and remained unfazed until she stabbed the Werewolf in its neck with her other dagger.

The Werewolf howled in pain and rolled off Robyn. The two deep wounds gushed with crimson life as a purple smoke emitted from them. The Werewolf’s fur began to recede into wrinkly skin. The gigantic eyes, the enormous hands and the sharp teeth all began to shrink until she was once again Robyn’s Grandmother.

…Or what was left of her as she lay lifeless on the unforgiving forest floor.

Robyn stood up, dusted off her cloak and shed a tear as she dropped her twin daggers.

Robyn returned to the Mercenary Guild, carrying her Grandmother in her arms. She rested her upon a stone dais and threw her crossbow and daggers against the floor, catching the attention of the Guild Leader.

“Were you successful in administering the antidote?” He asked.

Robyn pulled her hood down to reveal a face wrought with despair. “Why didn’t you tell me that this was her affliction?”

“She ran rampant across the village streets every night. She had to be—”

“Isolated and murdered?” Robyn stepped forth.

“But my dear, Robyn, you’ve never had a problem hunting monsters before. Many of which lived alone in caves or under bridges.” The Guild Leader placed a hand on her shoulder. “Such is the curse of our townsfolk who will all inevitably transform into hideous creatures.”

Robyn shoved the Guild Leader’s hand off of her shoulder said, “Who’s the real monster here?”