We’ve taken a look at how our present lives are defined by our pasts, and to come full circle, we will delve into breaking the shackles of history and achieving freedom in the future.

As always, characters are driven by Goal, Motivation, and Conflict. All three keys play an important part into unlocking the potential that resides in all of us, fictional and real people alike. Here is how GMC is considered in a character profile:

The First Day of the Rest of Your Life

Desires drive all action, purpose, and intention. Having a clear understanding of your desires is fundamental to understanding what steps you need to take toward leading a fulfilling life, as well as providing value to the rest of the world.

Even if your initial desire is what propels you into action, the desire may change over time or evolve to something else based on how much you want to achieve. Sometimes you do get what you want and realize you desire so much more than you ever realized. 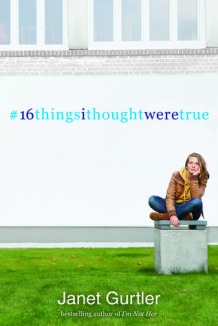 Such is the case for Morgan from #16Things I Thought Were True by Janet Gurtler. After her mother suffers a heart attack, Morgan gathers the courage and tenacity to ask about the biological father that was absent throughout her childhood.

At the start of the story, Morgan sets out to gain 5000 Twitter followers, while having 0 friends in the physical world because she feels alienated after having an embarassing video of her dancing in boy’s underwear going viral.

Due to certain circumstances, Morgan is forced to allow two of her co-workers, Adam and Amy, to accompany her on a road trip to seek out her biological father.

Although confronting him is her initial desire (as well as amassing a ton of Twitter followers), Morgan develops a bond with Adam and Amy; two co-workers she had barely liked or understood at a personal level before their heart warming–and sometimes gut wrenching–road trip together. Her true desire all along had been garnering connectivity, and it didn’t have to come from her long lost father.

What are your main desires? Have you achieved them only to realize there was something more meaningful out there? What steps are you taking today in order to achieve these goals in the future?

Another important aspect of characterization is having strengths that contrast a character’s vulnerabilities. Many protagonists are victims of circumstance which drives us to sympathize with them, but in order for us to even want to root for them, they need to have major strengths that can help make them more appealing.

In the hit series How I Met Your Mother, Ted Mosby goes on a seemingly unending search for his soul mate. He starts off as a desperate lovelorn who just can’t catch a break because his desire often becomes a part of his major flaws.  Having this desire starts off as a way to avoid himself and have him develop the mentality that he is nothing without somebody to love.

However, throughout the course of this dramatic rom-com, we learn that he has a big heart and he’s deeply invested in his friends. The love that he provides for them transforms into love for himself and discovering his own value as an individual before meeting The Mother/Tracy McConnell.

Ted Mosby’s strength is his ability to love and his hopeful spirit, but it took transmuting it for himself and for what he already had in order to achieve his goal; meeting a woman who more or less resembles a combination of all his friends.

What are your major strengths? How do they play a role in helping you achieve your desires?

The mark of a strong character is intertwining their personal desires with their major strength in order to contribute something to the world at large. People who want to make a difference in the world, or at least in their immediate world (interpersonal relationships), are always challenged by people who want to keep things the same and not improve the state of the world.

Having a mission and commiting to it is admirable because it’s the ultimate test of character to offer your gift to the world, despite of its initial reluctance to accept it–when ironically, the world may so desperately be in need of your gift.

Batman, despite all his violent brutality serves as a good example for a character rooted in their principles. He’s committed to fighting injustice, but will never ever kill criminals.

He believes anybody can be redeemed and sees the possible good in others all despite of the hatred he has for his parents’ murderer (which changes depending on which reiteration of the Batman story you read, watch, or play).

I could just as easily use a character who embodies the purist level of virtue, but I think Batman serves as the best example because he’s still fundamentally flawed being so addicted to enacting violence, and only stopping short of actual murder. It’s debatable whether or not he creates more villains than he puts away, but one thing is for sure: he is committed to his perpetual passion for fighting crime as his main mission.

What are you passionate about? What’s your main mission? What mark do you want to leave in the world and why do you think it’s important?

2 thoughts on “Crafting a Character Part 3: A Better Tomorrow”